From Lexicon Leponticum
Jump to navigationJump to search

The North Italic Script is an alphabet system that has been widespread in northern Italy approximately between the 8th century BC and the 1st century AD. Several regional variants can be identified over this period of time.

In LexLep we do not distinguish between regional variants of the North Italic script as long as we have not defined significant formal criteria. Formerly established "alphabet areas" like those of Lugano, Sondrio, Bolzano, and so on (Pauli 1885, Lejeune 1971) seem to be inadequate since there are, with the one exception of Camunic alphabet around Sondrio, no graphic or orthographic borders between these areas. One may, though, recognise certain typical "Venetic", "Raetic" characteristics. The variation, for example, between the various sub-types of the Venetic script are more pronounced than are the differences between any of those variants and the Lepontic script. Only the "Camunic" script stands out very distinctly in the North-Italian area. 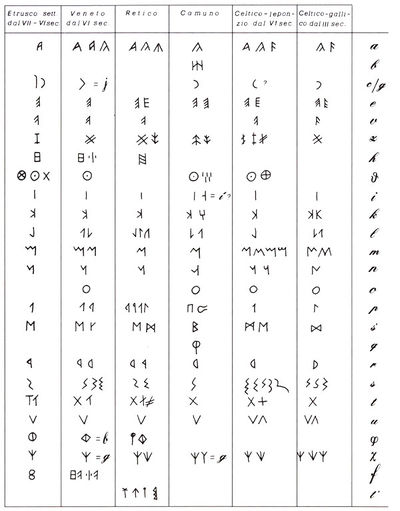 A curious feature of Lepontic, which aligns it with the Venetic and Camunic writing traditions, is the inclination to 'abecedarial' writing. Even though no full alphabetic sequence has been found so far in the Lepontic region, there are a number of sequences consisting of the initial elements of the alphabetic sequence (aev, maybe zv with reversed order of the first two consonantal signs) which serve as abridged surrogate of the full series.

All the character variants of the North Italic Script are rendered by a special character.

Please note that the hitherto defined character variants represent an interim result. Not all variants are confirmed yet. The listed variants include all readings (including several variant readings), and therefore some variants are listed a number of times. We are still working on the evaluation. A chronological analysis has not yet been conducted.

This list is not a comprehensive collection of relevant literature. It is a first result of the research work in progress.

Overview Pages:
Archaeological Overview I Cisalpine Celtic I Historical Overview I Inscriptions of doubtful relevance I Morphology I North Italic Script I Numismatics I Onomastics I Phonology
Retrieved from "https://lexlep.univie.ac.at/index.php?title=North_Italic_Script&oldid=26181"
Categories: